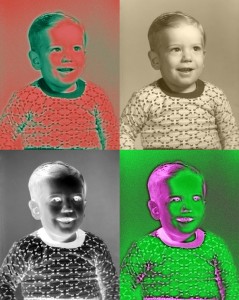 “The day that any one of you can touch any one of my family is over.  The next time you try to injure one of us, this what is has now changed. I have grown up,  I am no longer an infant or somebody’s kid. Nor am I that weak, helpless, fucking teenager. “

But that is not how it went down, that is not the way it could have gone down.  That is the once living nightmare trying to reconcile itself across time, that is the now distant thought of revenge braying to my always present ego.  That is an ethereal daydream and within it I am addressing a rabble of mocking violent phantoms or one solid crusty white trash jackass with a loaded gun, or that same bigoted drunk who is holding a running chainsaw. And he is locked into fore-ever while threatening to cut off the head of my own sweet dog.  Or I am breaking another man’s wrist that I have just met while just shaking his hand.

That is the hopeless and lost portion of a dichotomy that can live deep inside even a lifelong pacifist.  The circumstances change whenever it decides to retells itself to itself, when it decides on another could-have-been plausible ending.  No.  Never an ending.  Maybe just a second act.

For there is the other side that makes it the dichotomy.  This side is so far away from the first, it exists only in the flesh and blood and my commitment to generations who pledged my life to one of nonviolence even before I was born.  Regardless. It was on “this side” where what really happened did happen.  It is the path I took, a path with its own dangers and where the real enemy was ever more likely to be myself.

And that is what the high and the low road have in common.  I was always, back then, despite my own innocent intentions,  meant to be living at risk, the question was only as to who was the threat.

Let me try to explain. And I will in a future entry after a time when this momentary cloud has departed.  Because there is always that occasion, when I visit one lonely hillside where so many loved ones now reside, where I cannot help but drop to my knees.  And within my flowing tears, I ask myself if I have found enough courage to remain on the right road despite whatever lies ahead.  And also, maybe more importantly, despite whatever shadows, indelibly,  have always lurked…but now so far behind.

Transitions of a Memory