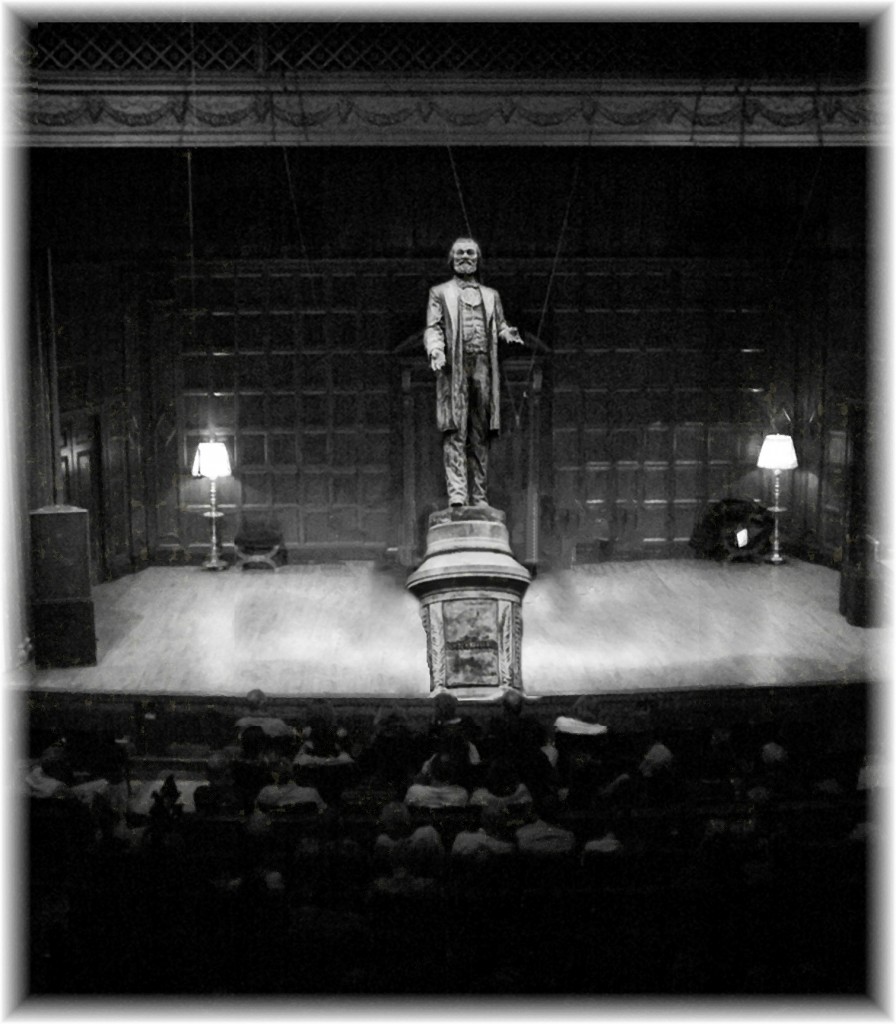 Last night’s performance “Remembering Frederick Douglass” by the Rochester Chamber Orchestra conducted and programmed by Arild Remmereit was one of the most moving as well as motivating experiences that I have ever witnessed here in Rochester, New York.

Long before W. E. B. Du Bois, Langston Hughes, Malcolm X, Martin Luther King Jr and August Wilson, the words of Frederick Douglass called out the nation and the world with searing demands for equity for all peoples – whether slaves, native Americans, Jews or Women.  Maestro Remmereit combined a blend of all the arts and used this to frame Frederick Douglass’s timeless eloquence.  The transitions to and from music, of composers Beth Denisch,  Adolphus Hailstork and William Grant Still, and between the spoken art of Douglass…including his own heart rending story and many insightful selections from his Rochester Newspaper “The North Star” …were beyond what words alone can convey.  A selection of Rochester Clergy gave Douglass his voice and there were many times these men and women seem to summon his very essence onto the stage.  Moving selections of dance by Thomas Warfield were integrated with a presentation of Artwork inspired by Douglass. When music, dance, prose and visual imagery all overlapped the whole was an intense focus on the emotion and meaning of Douglass’s words.  At several crescendos of thought, the Orchestra combined with Soprano Leslie Fagan to accent the evening with operatic grandeur.

Maestro Remmereit’s beautiful and reverent presentation raised this concert to something far more than one evening’s entertainment – it became an unforgettable teaching experience.  The message portrayed not only Rochester’s heritage – it also contained a timely and noble epistle sent across the ages to our community.  The contents are a request that we begin living up to our potential as understood long ago by one of local history’s most thoughtful residents. And seldom has just the name of this City been associated repeatedly with the greatness of the human spirit – as again and again, the speakers began selections with the words “Rochester – The North Star” followed by a date in the 1840s or 1850s and then Douglass’s immortal prose. Even when what followed was a harsh assessment of the failure of the American promise, there was always a sense of pride that such precise moral wisdom had first been recorded here in Rochester.

The spoken part of the concert ended with a reprise of this quote: “Men do not live by bread alone, so with nations. They are not saved by art, but by honesty. Not by the gilded splendors of wealth, but by the hidden treasure of manly virtue. Not by the multitudinous gratification of the flesh, but by the celestial guidance of the spirit.” A final soaring song by Fagan and the Orchestra ended the concert which segued to an immediate standing ovation.

I hope this performance is repeated more than once. Many audiences within and beyond Rochester deserve their chances to bear witness to this vision and to be swept away by Arild’s masterpiece of programming.  Arild has used the local community of arts and the voices of its clergy as his canvas. And his message is made clear using the legacy and the promise of this City’s history.

Each of us who appreciate the arts creates their own inner gallery of experiences and memories.  Upon reflection I find resonance with another unforgettable collaboration enjoyed in the very same building which also houses the Eastman Theater.  “Remembering Frederick Douglass” make me also remember  “Griot New York” created together by Garth Fagan and  Wynton Marsalis.   In terms of the artistic passion of equity and social relevance,  both works will be installed alongside one another in my own “inner gallery” until I go!